Phil Plait (one of my favorite science bloggers) pointed out that yesterday marked the 25th Anniversary of this famous photograph. It’s a picture of Earth, taken by the Voyager 1 Spacecraft, from more than six billion kilometers away.

It is the image that inspired this bit of brilliance from Carl Sagan:

From this distant vantage point, the Earth might not seem of any particular interest. But for us, it’s different. Consider again that dot. That’s here. That’s home. That’s us. On it everyone you love, everyone you know, everyone you ever heard of, every human being who ever was, lived out their lives. The aggregate of our joy and suffering, thousands of confident religions, ideologies, and economic doctrines, every hunter and forager, every hero and coward, every creator and destroyer of civilization, every king and peasant, every young couple in love, every mother and father, hopeful child, inventor and explorer, every teacher of morals, every corrupt politician, every “superstar,” every “supreme leader,” every saint and sinner in the history of our species lived there – on a mote of dust suspended in a sunbeam.

The Earth is a very small stage in a vast cosmic arena. Think of the rivers of blood spilled by all those generals and emperors so that in glory and triumph they could become the momentary masters of a fraction of a dot. Think of the endless cruelties visited by the inhabitants of one corner of this pixel on the scarcely distinguishable inhabitants of some other corner. How frequent their misunderstandings, how eager they are to kill one another, how fervent their hatreds. Our posturings, our imagined self-importance, the delusion that we have some privileged position in the universe, are challenged by this point of pale light. Our planet is a lonely speck in the great enveloping cosmic dark. In our obscurity – in all this vastness – there is no hint that help will come from elsewhere to save us from ourselves.

The Earth is the only world known, so far, to harbor life. There is nowhere else, at least in the near future, to which our species could migrate. Visit, yes. Settle, not yet. Like it or not, for the moment, the Earth is where we make our stand. It has been said that astronomy is a humbling and character-building experience. There is perhaps no better demonstration of the folly of human conceits than this distant image of our tiny world. To me, it underscores our responsibility to deal more kindly with one another and to preserve and cherish the pale blue dot, the only home we’ve ever known.

The image inspired the passage. And the passage grew into its own book, Pale Blue Dot: A Vision of the Human Future in Space.

I’ve been skimming it this morning, and it’s chock-full of graceful, elegant prose, and lively storytelling. 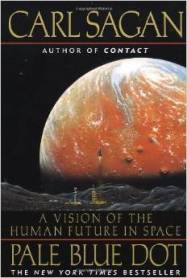 We were wanderers from the beginning. We knew every stand of tree for a hundred miles. When the fruits or nuts were ripe, we were there. We followed the herds in their annual migrations. We rejoiced in fresh meat. Through stealth, feint, ambush and main force assault, a few of us accomplished together what many of us, each hunting alone, could not. We depended on one another. Making it on our own was as ludicrous to imagine as was settling down.

As Sagan points out, it was only in the last 10,000 years — a mere speck on the timeline of our existence — that we traded our wandering ways for a life more settled. We gave up hunting and gathering, and learned instead  to plant, grow and harvest. The benefits of this shift were immediately obvious.

The costs took a little longer to realize. Sagan writes:

For all of its material advantages, the sedentary life has left us edgy, unfulfilled. Even after 400 generations in villages and cities, we haven’t forgotten. The open road still softly calls, like a nearly forgotten song of childhood. We invest far off places with a certain romance. This appeal, I suspect has been meticulously crafted by natural selection as an essential element in our survival. Long summers, mild winters, rich harvests, plentiful game — none of them lasts forever. It is beyond our powers to predict the future. Catastrophic events have a way of sneaking up on us, of catching us unaware. Your own life, or your band’s, or even your species’ might owe itself to a restless few – drawn by a craving they can hardly understand or articulate, to undiscovered lands and new worlds.

He goes on, in just a few paragraphs, to recount our exploring — from ancient times, when the known world consisted of “Europe and an attenuated Asia and Africa,” to modern ones, when “there seems to be no area left to explore, at least on the land…”

He then segues from this universal epic to something far more specific: his own family history, marked as it is by its own wanderings. His grandfather, who grew up in the Austro-Hungarian empire of the late 19th century, fled to the New World in 1904. According to family lore, he was evading a murder rap (the New York Times reports that he had  killed an anti-semite).

How different from his tiny backwater hamlet the great German port cities must have seemed, how vast the ocean, how strange the lofty skyscrapers, and endless hubbub of his new land. We know nothing of his crossing, but have found the shift’s manifest for the journey undertaken later, by his wife Chaiya… She traveled in the cheapest class on the Batavia, a vessel of Hamburg registry. There’s something heartbreakingly terse about the document: Can she read or write? No. Can she speak English? No. How much money does she have? I can imagine her vulnerability and her shame as she replies, ‘One dollar.’

All of this is just the beginning, of course, just a snippet of the book’s opening chapter. The rest, as its title suggests, is devoted to the saga of space exploration.

But we know a bit about where those other stories go from there.  Chaiya has a daughter, who in turn has a son. The son is named Carl, after his grandmother. He goes on to become one of the most influential and beloved physicists of all time – both a space explorer and a Pulitzer-Prize winning writer. He inspires a generation of scientists (and non-scientists!) to think, and wonder, and explore — to marvel and delight in the mysteries of the universe.

And humanity moves forward, too — out of a world shrouded in mystery, and into one that has been wholly mapped and catalogued (just about). The adventurers who crossed seas and planted flags give way to those who would map stars and chart galaxies and dream of colonizing new planets.

And the rest of us continue wandering (many of us, anyway), either in search of refuge or to satisfy some primal urge.

And all of those sagas — every last bit of every last one — are contained on that same pale blue dot, suspended in that sunbeam.

PS — for a look at some of the Voyager 1’s other spectacular images, see Jason Major’s post, here.

2 thoughts on “25 Years Later: You are still here, “on a mote of dust suspended in a sunbeam””